In 1997 together with Edelbert Köb, founding director of the Kunsthaus Bregenz, and architecture theorist Otto Kapfinger we talked about making a series of books on contemporary Austrian architecture. The idea was to produce useful companions that would direct attention towards current buildings in the various Austrian states. Today digital service platforms would most probably be used for this purpose. But in the late 1990s people were only starting to explore the various areas in which digital communication could be used and they debated, for instance, about whether “scrolling” was good or bad, while information designers were already researching interaction sensor systems that went far further. The development of smart phones had only just begun, tablets were still a concept in the designer’s filing cabinets, and responsive web design was not yet a theme. But despite all of this the question today would be exactly the same as in 1997: how can the buildings concerned be best presented and how can they be easily found – both in the explanatory medium itself as well as in reality, on site?

Already during the first discussions it soon became clear to us that the contents – photography, texts and plan drawings – had to be depicted in a small format at a high level of precision in terms of graphics and reproduction technology. The haptic demands were equally important: the book had to be small, flexible and water-resistant. It should be a size that would allow people to take it with them easily on their travels and it should fit in the glove compartment, on a bike back-carrier or in a jeans pocket. But only a well thought-out inner navigational system could guarantee usefulness.

For the first volume Otto Kapfinger divided the state of Vorarlberg into manageable areas. He organized the buildings selected in a numbered sequence along the routes leading to them. The guide is supported by maps of the respective regions that were made especially for the book and show only the most important streets, features and names. This makes it easier to locate the buildings, which are marked by consecutive numbers. With just two numbers, one for the region and one for the particular building, readers are guided through the book and to the buildings. The number of the region is placed above a horizontal line, the building number below it.

This combination of numbers also functions as pagination. This system enables the buildings to be easily found in the plans of the region, on the pages about the buildings, and in the indices in the appendix Chapters on the regions organize and structure the volumes. In the architecture guide to Vorarlberg the introduction to this chapter is structured by introductory texts, a map of the region, and an index listing all the buildings in the region. In other volumes, for instance the guide to Carinthia, this introduction also offers full bleed photographic motifs of the specific region. Generally speaking each building is devoted a single page, only a few buildings take up two pages. The convenient size demands precise typography and extremely high quality reproduction in black and white print. In some cases editions in different languages – one in German, one in English – or editions with several languages were produced. We responded to the specific characteristics of the different regions with individual lettering menus.

In making each of the volumes the “battle over material” presented us with a major challenge: pictures from very different sources, in different formats and resolutions. Through careful black and white duplex lithography and special print settings, it was possible to make the photographs uniform and to optimize them for printing at minimum size. The reduction to black and white led to greater concentration on the spatial and sculptural qualities of the buildings. The architects’ plans – generally not suitable for publication in postage-stamp size – called for time-consuming and detailed processing as vector graphics, harmonized with each other and reduced to the size envisaged in the layout.

The volumes have between 256 and 364 pages. To ensure that the books are as compact and flexible as possible, we chose an opaque but extremely thin art paper as the core paper. The books are bound as thread-sewn brochures in a laminated soft cover with fold-out pages without back gluing, which guarantees a book that is easy to open from the first to the last page.

While the covers for the various Austrian states differ from each other, all of them remain within a restrained palette of colors. Finely placed lines against a dark ground are common to the covers of all volumes.
In the architecture guide to Vorarlberg the design grid of the core book with its fine lines transports the structure of the layout from inside the book to the outside. The cover design thus refers to the development of contemporary Vorarlberg architecture, which made the architectural modulor into a visible design principle. In the guide to architecture in Tyrol the title is accompanied by linear mountain silhouette, which however is deceptive. In fact it is a line diagram, which on the vertical axis depicts interesting numerical values and the relevant figures for each region. For instance one can read the number of nominations and the age of the buildings chosen as well as the age of the architects involved. The cover to the guide to Carinthia shows the rivers and lakes in the region and gives the book a fine, vein-like network. The architecture guide to Burgenland and west Hungary shows the characteristic lines of the real estate cadaster, along with the motorway that slices through the narrow plots.

The buildings were generally selected by Otto Kapfinger who based his independent choice on the criteria of architectural innovation. The buildings chosen were, above all, those which examined certain themes for the first time, or which, within a wider building category typical of the time, embodied special aspects in a model way. As regards the organization and typographical hierarchy of the design the main dates of the buildings (name of the building, date, address and architect) form the headline of each project portrait. Short texts use key terms to convey the structural, spatial, energy and topographical concepts. The edge columns contain references to other structures of interest located near the buildings presented. 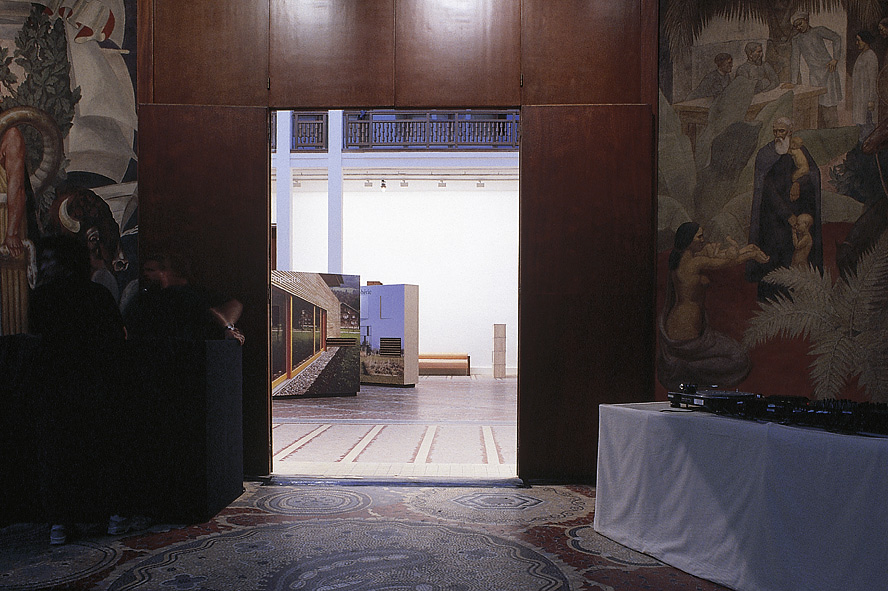 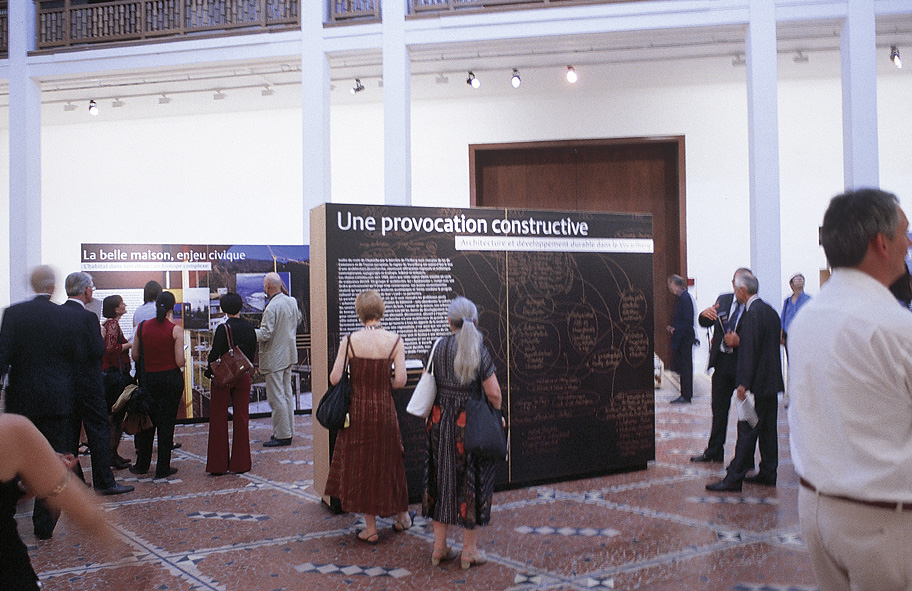 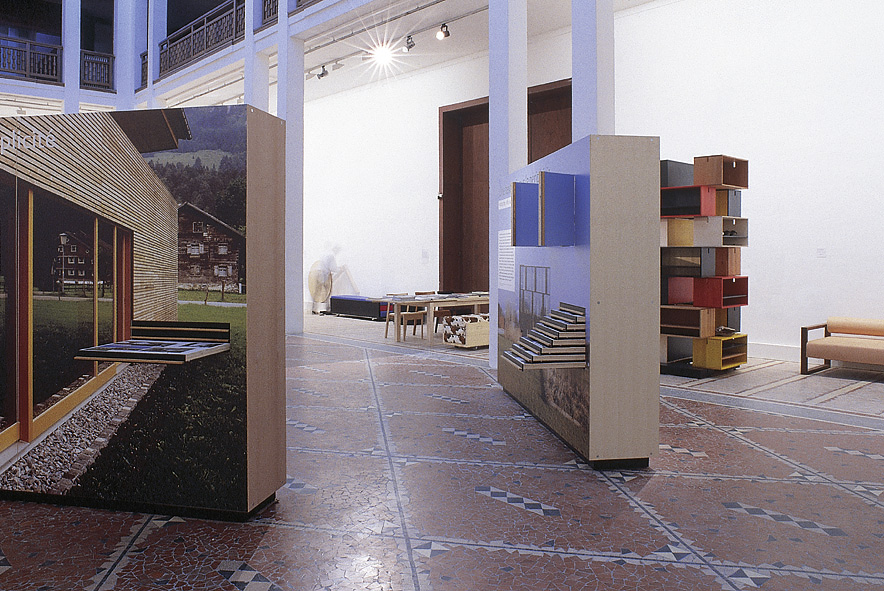 Developed in the context of the book series . . .

Under the title “Constructive Provocation – New Building in Vorarlberg” in 2003 an exhibition was shown in the building of the French architecture institute in Paris. It was subsequently translated from French into German and English and travelled to around 40 different exhibition locations in Europe. We were commissioned to provide the exhibitions graphics and to design the advertising material accompanying the show. Parallel to the exhibition a catalogue was published, which in terms of form and material was deliberately based on the series of guides to modern Austrian architecture. Alongside short texts it is above all images that tell about the development of the small state of Vorarlberg. Here three visual levels were selected:

_ A visual essay about the state and its people in black-and-white photographs by Nikolaus Walter. These images, one could almost say, small films, always tell a story.
_ Presentation of the current situation of architecture by means of color illustrations by Ignacio Martínez, which instead of showing individual buildings in the usual manner of architecture photography, presententire ensembles and therefore tell something about architectural neighborhoods and relationships.
_ Explanatory illustrations that present numbers, facts, statistics using narrative, in some cases also ironic means. For example the contour line from Paris to Vienna or cows placed on guest beds to illustrate that in Vorarlberg there are roughly as many cows as guest beds.