The first visit to the air-conditioned “strong-room” in the Stifts-archiv (monastery archive) of St. Gallen with the monastery archivist Peter Erhart was a very special moment. We encountered a fascinating organizational system with chests, drawers, boxes and portfolios for artistically made cards and documents, which may only be handled by those wearing gloves. Then there were the books in the full-height shelving – with the appropriate respect we took down the handwritten originals and the first examples of printed material. The books are medium size, not constrained by any kind of current day standardization, in bindings made of fantastic materials, cardboard, linen and leather.

The thread-stitched, hand-bound books could be easily opened and the individual details of the binding conveyed a great understanding of functionality. We were surprised by the unusual form of the areas of text and the layout. In many cases pages were divided vertically in the middle, the outer columns were empty or used only marginally, whereas the columns of text that run into the gutter margin were covered from top to bottom with precise calligraphies in small lettering and with an animated but yet rhythmical expression. The archivist explained to us that this “half-page” system was adopted to leave room for later entries, commentaries and additions. Peter Erhart then showed us the finds that he had selected, which were to be the actual focus of this project: four original diaries kept by travelling monks. The two curators, Peter Erhart and Jakob Kuratli Hüeblin, wanted to present these rare documents of the Benedictine culture of travel to the public for the first time. They planned an exhibition in the culture space of the Stiftsarchiv, an exhibition catalogue and academic publications, with translations of the Latin texts into German and Italian. These diaries are about travels in southern Europe, which in those days were often undertaken by aristocrats, musicians and men of letters, in this case with a religious background and the appropriate travel goals: first of all Rome as a spiritual centre, then on to Naples, regarded at that time as the world’s most beautiful city. “Vedi Napoli e poi muori – Die Grand Tour der Mönche (“See Naples and Die – The Grand Tour of the Monks”), was the title of the project that refers to travels and life, the secular and the spiritual.
Reinhard Gassner 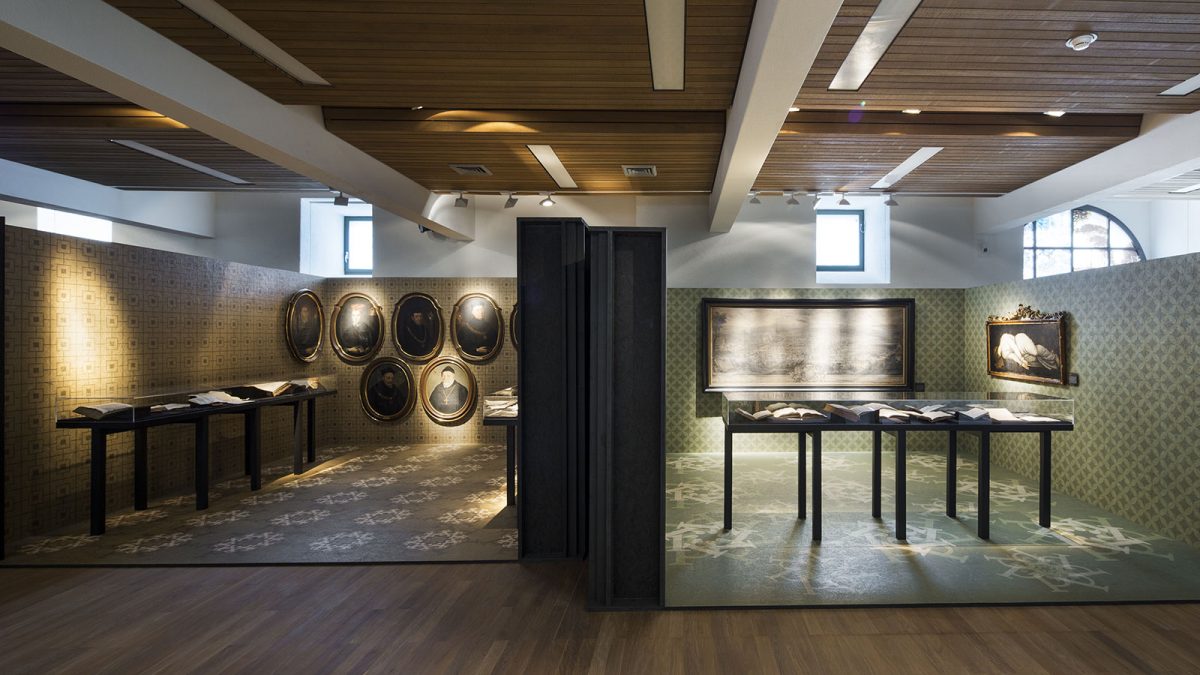 The colleagues from TGG Hafen Senn Stieger from St. Gallen had already made several exhibitions for the Stiftsarchiv and were responsible for the catalogue concept. Together with the curators we developed the briefing for the design work, down to sketches intended to serve as a basis for discussion. The collaboration with Dominik Hafen was highly constructive. For budgetary reasons in the further course of the project TGG concentrated on the catalogue work, while we prepared the design of the exhibition. In our first approach to the design we played with themes such as “Travel” and “Routes”. Display cases and exhibits were to hover at different heights throughout the exhibition space. On taking a closer look, however, it became clear that this approach could only catch the momentum of the monastic culture of travel in a superficial way; in fact this culture was something far deeper. The intentions and commissions connected with these journeys were the main concern. The monks were given clear instructions by the abbot. They also understood their lengthy and often difficult journeys as pilgrimages. These considerations led us to the idea of working with imagined and real spaces. We talked about the field of tension of monastic and secular life, the constant and the unstable. The task was to structure the theme itself as well as the valuable exhibits and to present them scenographically in a space measuring around 600 square meters. The curators responded positively to our idea of boxes that you could walk into, which they occupied with themes and particular characteristics of travel. They immediately recognized that this structure would allow the exhibition to be easily accessed and would eliminate the dilemma between a geographically and a chronologically oriented sequence. They named the four boxes “Peregrinatio” (pilgrimage), “Instructio” (business or official journey), “Recreatio” (recreation) und “Memorabilia” (mementoes).

It soon became clear that the spatial and architectural aspect was of decisive importance for this exhibition. We therefore suggested collaborating with Alberto Alessi, who had worked for many years in Rome as an architect and exhibition maker. This collaboration with Alessi provided an important basis for the design of the exhibition. In order to develop a feeling for this theme we went together on a “grand tour”. This trip to Rome brought us special experiences. Through Alessi we got to know the city from angles that were anything but commonplace, from very different and very unusual perspectives – roof-scapes, illusion spaces, diagonal views, cultural and historical details. What interested us were patterns, mannerisms and Baroque. The Palazzo Colonna was a treasure trove – the wallpapers with their ornament, the picture galleries filled with paintings arranged in the manner of the classic quadreria, polychrome marble intarsia work in the “stile cosmatesco” etc. The perceptible passion for color, image and pattern provided us with decisive formal stimuli for our design. Dealing with the perception of space is something that regularly accompanies us in our work. In the exhibition for the Stiftsarchiv in St. Gallen the central question was the room-in-a-room design. What size would work for the boxes so that the visitors could easily enter them? Would they be large enough for the exhibits? In such a big space, how should the open boxes best be positioned to evoke the lanes and squares of a town? What would this mean for guiding visitors through the exhibition? How should the interiors of the boxes be designed? 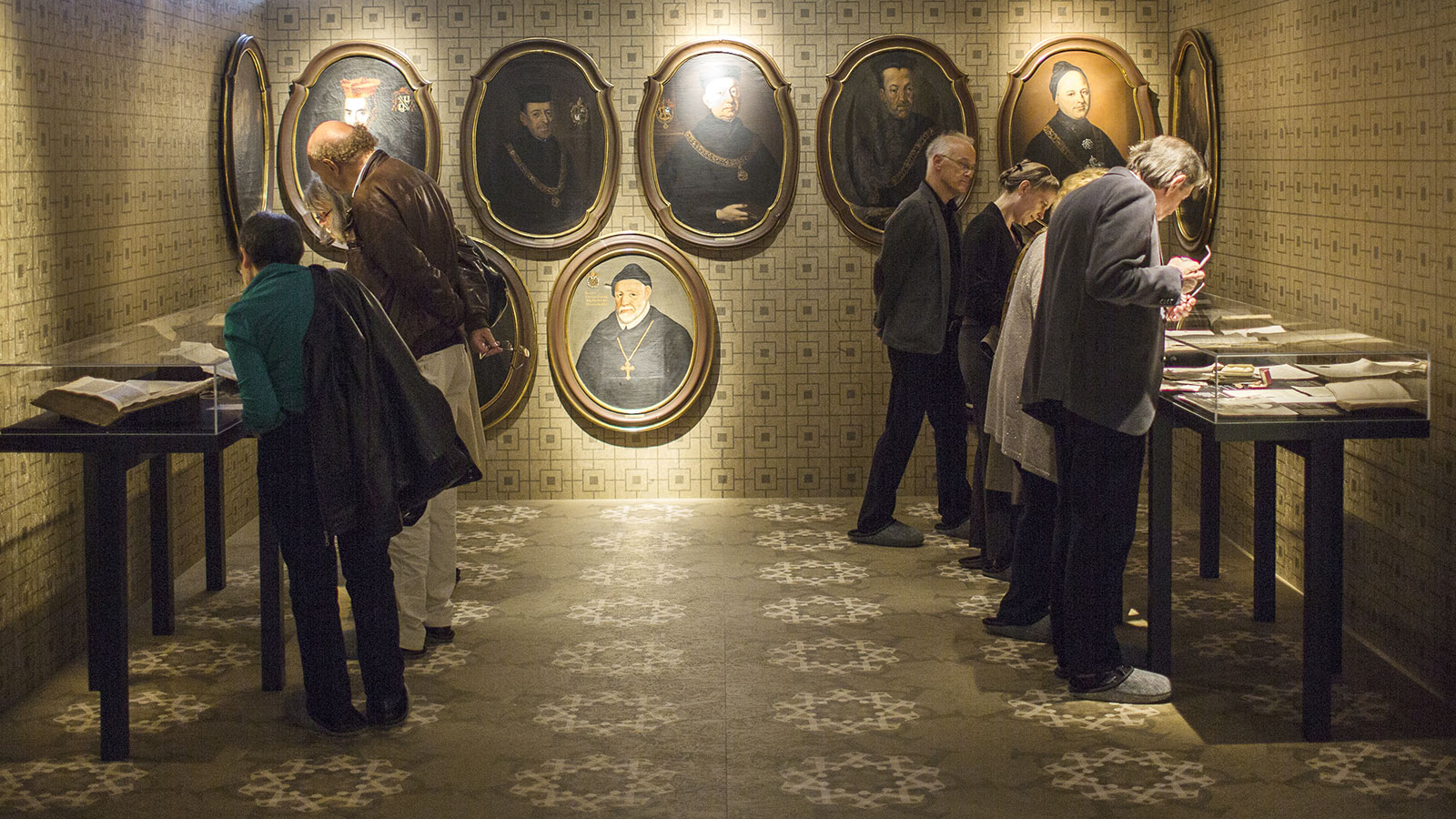 Alberto Alessi designed a timber structure with beams and large chipboard panels, at the same time he also tackled the design of the display cases for the exhibits. Each of the square boxes enclosed an area of around 20 square meters. Externally they created a kind of urban space with lanes, corners, squares and open areas. By opening the front wall interiors were revealed that, in terms of atmosphere, referred to studioli, i.e. studies or work rooms. Here the individual quality of the exhibits could develop. In contrast to the dark exteriors we covered the walls and floor in the interiors with graphic ornaments, creating a charged, mannerist atmosphere.
Reinhard Gassner

Inspired by the wallpapers in the Palazzo Colonna we visualised individual ornaments based on the initials of the names of the boxes – P, I and R. The color range and the nature of the patterns were matched to the specific themes. “Peregrinatio” was in a reflective dark violet, “Instructio” in a severe, dusty, beige-brown color, and “Recreatio” in a fresh, flowery green. The floors of the boxes were directly printed with tendril-like circular ornament in the same shade, derived from the initials. As a whole the interiors flickered like candles in space, underlining a mystic kind of atmosphere. Despite all the charged emotional quality and mannerist exaggeration our concern was always to achieve a balance between design and content. If one of these areas is too strongly emphasized the exhibition as whole can fail. In the game played between density and expansiveness, light and darkness, excitement and calm in St. Gallen we were able to find an appropriate presentation for the wonderful exhibits. 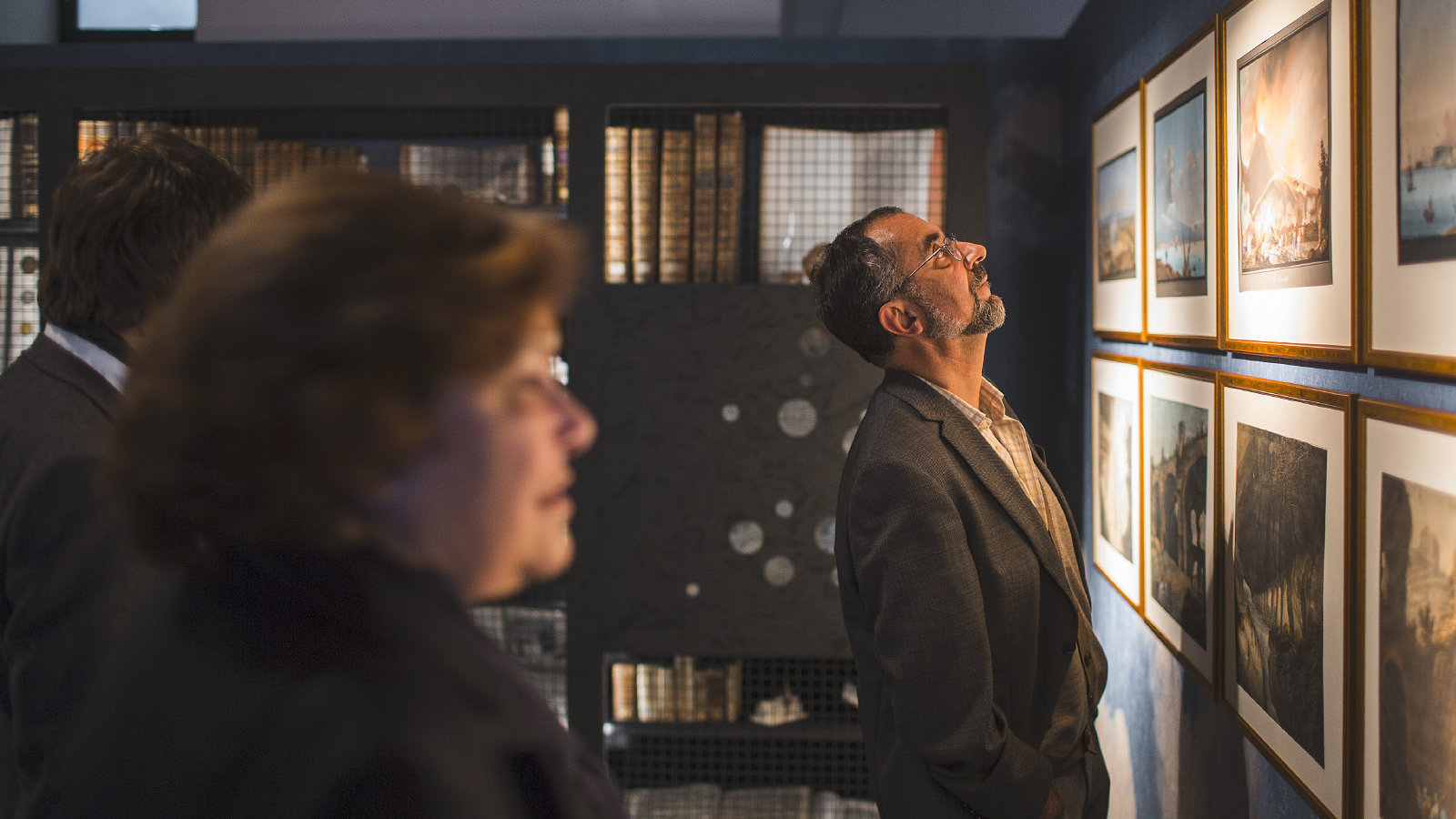 To clad the boxes we chose simple OSB panels which with their coarse strands provide a strong visual structure. How could these panels be durably and effectively printed in way that would allow the graphic pattern to overwrite the pattern of the material? First of all the panels were given a light coat of primer and then, using inkjet printing, numerous tests were made in order to arrive at the desired surface effect. For functional reasons to do with lighting and the height of the space we could not give the studioli a ceiling or the exhibition space a canopy. However, we decided to print a Roman sky on the floor and walls of the fourth box, “Memorabilia”, in this way completing the resonance space of references. This box was designed like a Wunderkammer with a wealth of exhibits and ways of presenting things from the laterna magica to peep-show images and to a quadreria.
Andrea Gassner 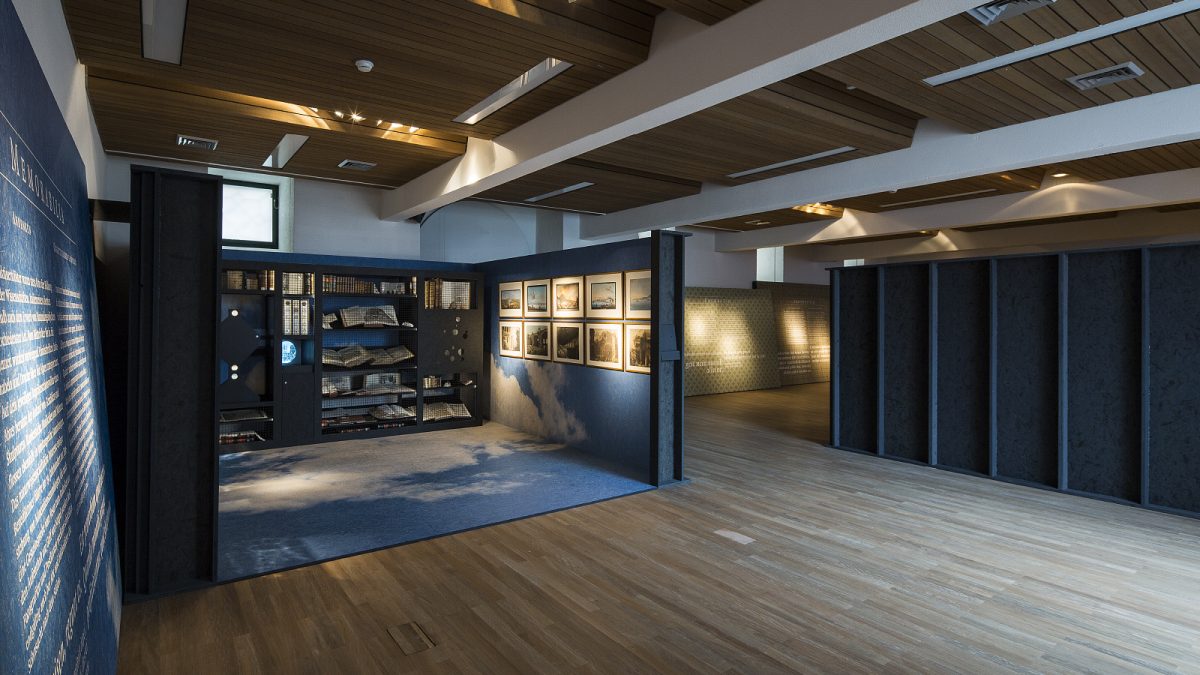 The floor of the exhibition space – a parquet floor glazed in a shiny dark brown – presented us with a particular challenge- This could not be reconciled with a scenography that envisaged the space outside the boxes as a separate level of the presentation. We tried out thin coats of loam but objections were raised to do with the problem of moisture. Through our persistance we were able to have the floor sanded before the opening of the exhibition. A solid, warm grey, olive wood floor, probably one of the largest north of the Alps, was revealed and provided an almost ideal association to the themes, ways, lanes and urban space. In order to protect this floor visitors to the exhibition had to wear felt slippers, which turned out to have a further benefit. The visitors shuffling across the floor experienced a different kind of perception, their movement was slowed down and the sounds they made as they moved were muted.
Reinhard Gassner