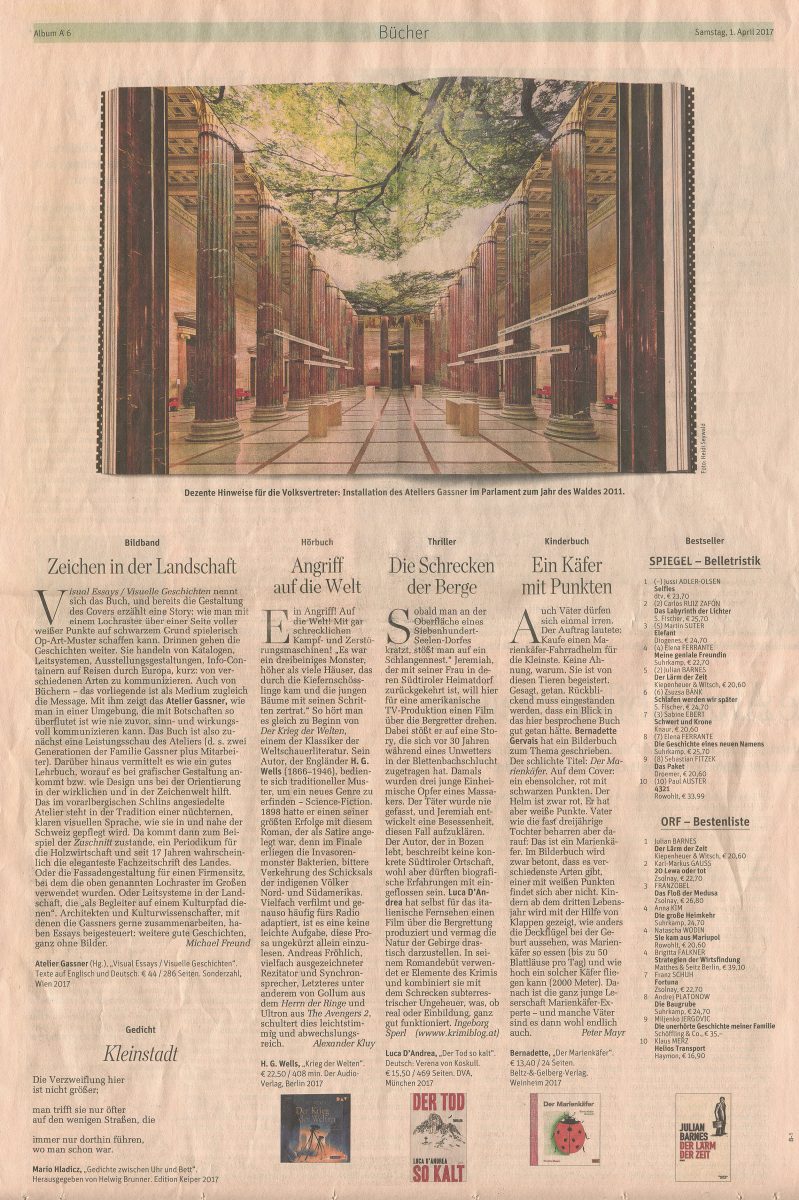 Signs in the landscape

Visual Essays / Visuelle Geschichten is the name of the book and the design of the cover itself tells a story: how by placing a grid of perforations over a page full of white points against a black ground one can, with a playful lightness, create op-art patterns. Inside the stories are continued: they deal with catalogues, guidance systems, exhibition designs, information containers that tour Europe, in short: with different ways of communicating. But also with books – the medium presented is at the same time the message. Atelier Gassner uses it to show how, in a world that is flooded with messages more than ever before, effective and meaningful communication can still be made. The book is also a presentation of the achievements of the Atelier (two generations of the Gassner family plus staff). In addition it explains, like a good textbook, what the main concerns in graphic design are and how design helps us to find our way in the real world and the world of symbols. Based in Schlins in Vorarlberg, the Atelier belongs to a tradition of a sober and clear visual language that is cultivated in and near Switzerland. A fine example is »zuschnitt«, a periodical for the timber industry and over a period of 17 years probably the most elegant specialist journal in the country. Or the facade design for a company headquarters in which the grid of perforations referred to above is also used. Or guidance systems in the landscape, which serve as “companions on a culture route”. Architects and experts on culture with whom the Gassners like to work have contributed essays: other good stories, entirely without pictures.

The invitation to the book presentation in Vienna was issued by Dieter Bandhauer, Sonderzahl Verlag. During the panel discussion on the theme “Book versus Transience” Andreas Gassner and Reinhard Gassner exchanged views with Walter Bohatsch, Otto Kapfinger, Roland Jörg and Dieter Bandhauer (presenter).
Revolution Slider Error: Slider with alias atelier-gassner-visuelle-geschichten-buchpraesentation-fhv not found.
Maybe you mean: 'atelier-gassner-1' or 'AG-Slider-Team' or 'ag-slider-team-2'

It was not by chance that the FH Vorarlberg was the host for this book presentation: Reinhard Gasser was a co-founder of the study course InterMedia and headed the design department in the late 1990s. The book was presented by course director, Markus Hanzer. An introduction was given by Roland Jörg, following which Reinhard Gassner and Andrea Gassner were available for both questions and answers. Alongside the book presentation selected works were presented at a large scale in the form of a temporary exhibition. 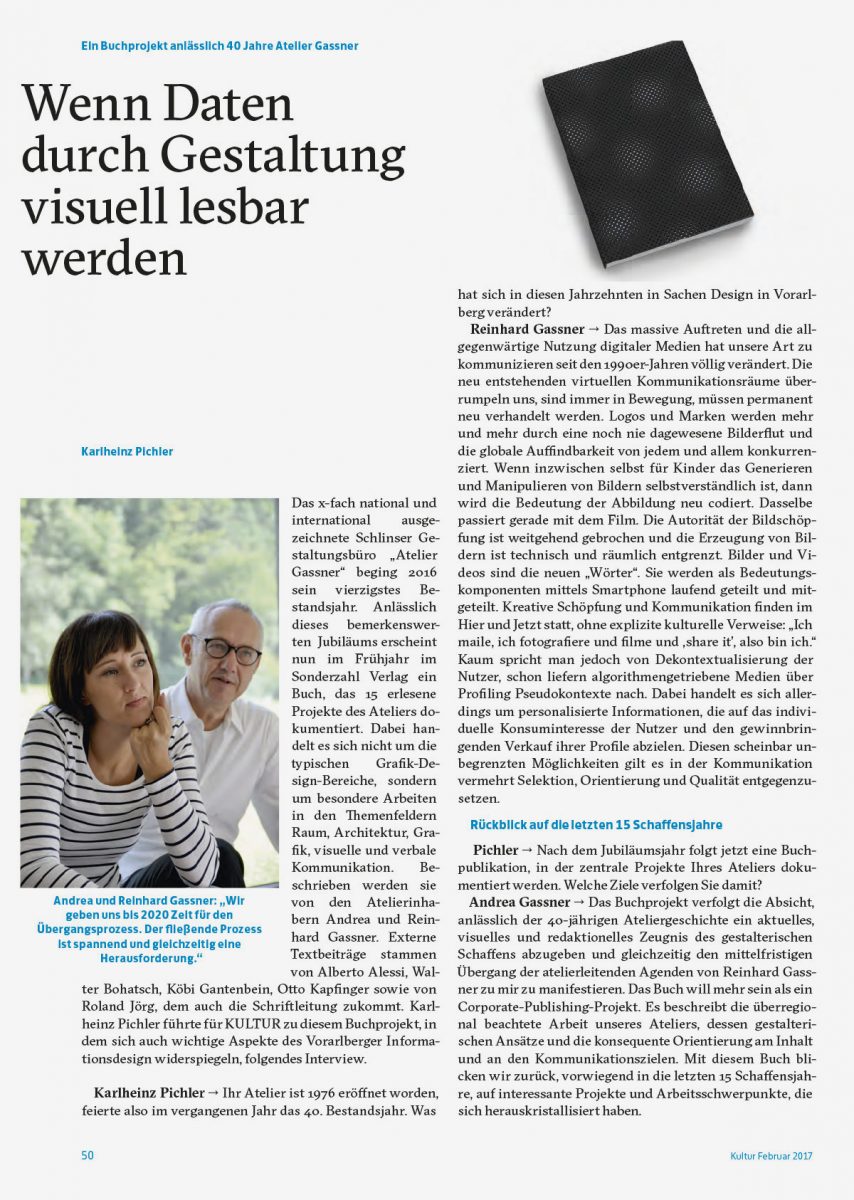 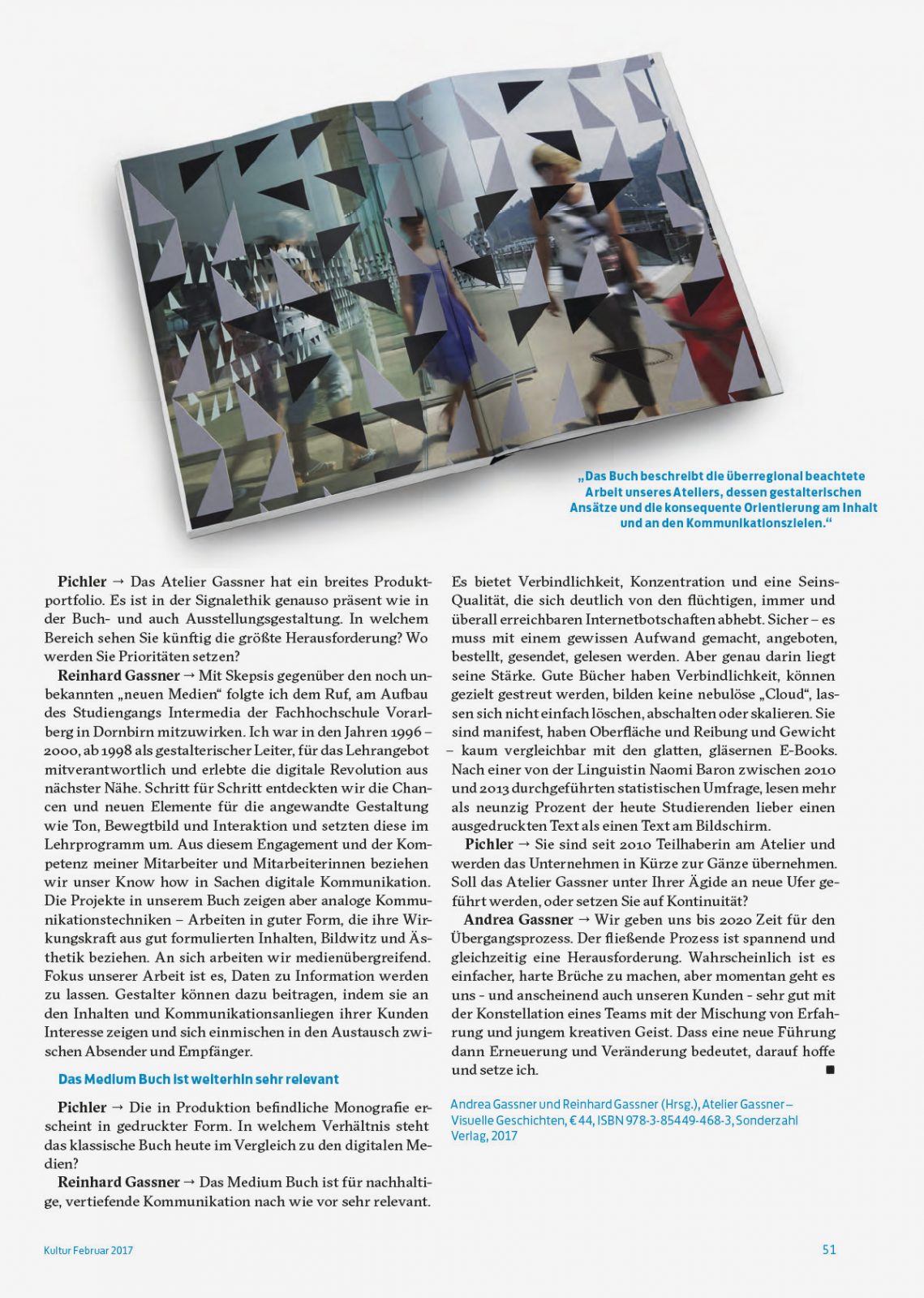