The UN-Resolution 61/193 declared 2011 throughout the world as the “Year of Forests”. This resolution expressly refers to the importance of the sustainable management of forests. The managing director of proHolz Austria, Georg Binder, saw a plenary session of the parliament in Vienna as a chance to develop an awareness among politicians and the general public of the importance of forests as a source of raw material. The peristyle hall of the parliament is the central place of communication for members of parliament and for political decision-makers. Therefore on the occasion of the plenary session on the theme forests and wood, held on September 21, 2011, the Austrian forestry and timber industry organized various activities and events:

_ installation with core messages in the peristyle hall of the parliament
_ large-format, 16-page supplement on the theme of forests and timber in “Der Standard”, “Die Presse”, and “Wirtschaftsblatt”
_ personal invitation to the opening issued to all members of parliament, along with a copy of the supplement
_ opening of the day of action in the peristyle hall with the President of the National Council
_ press reception and parallel publicity work on the theme of forests and timber

For the action day in the parliament we initially discussed a classic presentation with information panels accompanied by printed material. But on first entering the parliament’s main event space– the imposing peristyle hall in Theophil Hansen’s historic building – the idea arose of introducing something into this world of stone that would amaze visitors and make a lasting impression on them. This hall has 24 huge marble columns that rise upwards like powerful tree trunks. In my concept were to carry huge foliage crowns, transforming the entire hall into a forest. The question was how to make this vision reality. Here memories of a trip to Las Vegas provided me with a source of inspiration. That entire city is a kind of artistically perfected amusement park, shimmering, glittering, pink.

The means used to operate this illusion machine are truly fascinating. It gives you the feeling that time does not exist; in the middle of the night you arrive in places in which it seems that the sun has just risen. The relationships between reality and dream world are astonishing. In the shopping mall of the Venetian Hotel for instance a bright blue sky blows away any feeling of tiredness. I was amazed by the fact that our physical sensibility can be so influenced by just ceiling painting and lighting.

The chance to transform the stone hall into a woodland clearing was perfect. The hall receives daylight through a glass ceiling. We tested the translucency and suitability for printing of several kinds of textiles. This was to ensure that the atmosphere of a forest would seem as real as possible and did not have to be achieved with artificial light. From a construction viewpoint the material employed could not be too heavy and had to meet the requisite fire rating. The building is a listed monument and therefore had to be treated with great care and respect. For instance in fixing the banners to the columns only rubber rings could be used, and the lifting platforms could not drive directly on the marble floor. Photographer Bruno Klomfar was commissioned to take high resolution photograph of the crowns of various native trees from the right perspective and with a suitable aspect ratio. This was tricky: as not only did the tree crowns have to be visually convincing, the tree trunks also had to match the dimension of the column shafts. Viewers were to be given the impression that the trees grew out of the columns.

The printed material was around 270 square meters in area, exactly the same size as the opening in the ceiling and met the columns directly. To suit the elongated central space the tree crowns resembled a mannerist ceiling painting and grew up into a blue sky. The ceiling to the hall became a canopy of leaves. You stood like in a woodland clearing and almost felt as if you could smell the earthy scents of the forest. A gentle sound backdrop with woodland noises and the calls of native forest birds helped strengthen the transformation. The installation freed the huge hall from its historical pathos. That all of this could be done successfully was thanks to the commitment of the managing director of proHolz Austria, Georg Binder, who from the very start was convinced by the idea. Barbara Prammer, President of the National Council at the time, said: “it’s wonderful that the forest has been brought into the parliament in such an impressive manner.” Natalie Iwanowytsch, responsible for technical matters in the parliament, supported the action and, after everything had been fitted in place, said: “Now I have the feeling that one can breathe freely inside here.“
Visitors to the action day were impressed by the transformation of the marble space and related this to the convincing set of arguments presented above head level against a wooden background: on eight planed boards up to 8.5 meters in length, which were mounted along the rows of columns, important statements about the value and function of the forests and of timber were presented in large lettering and plain typography. Ruth Gassner designed contrasting counters of raw, sanded spruce that were placed in the hall for visitors. The entire scenography communicated the contents in an appealing, memorable way. The question was: how to ensure public awareness of this message? 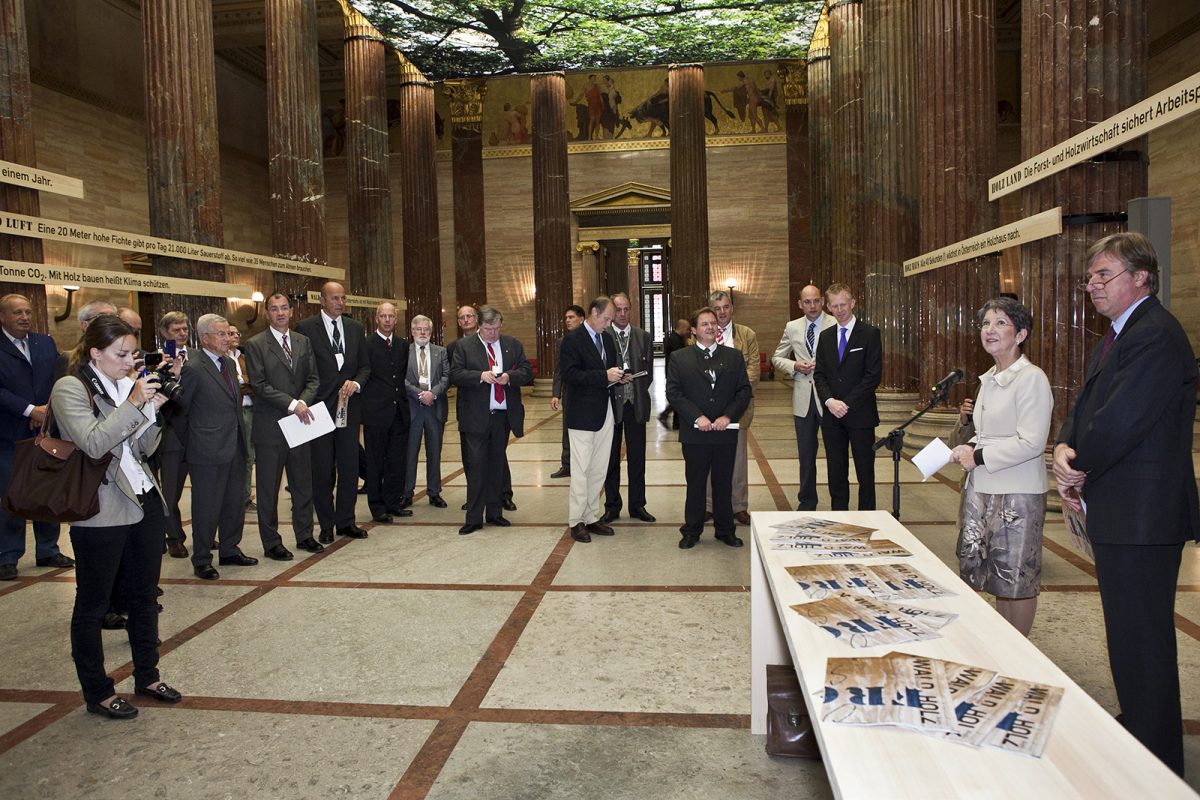 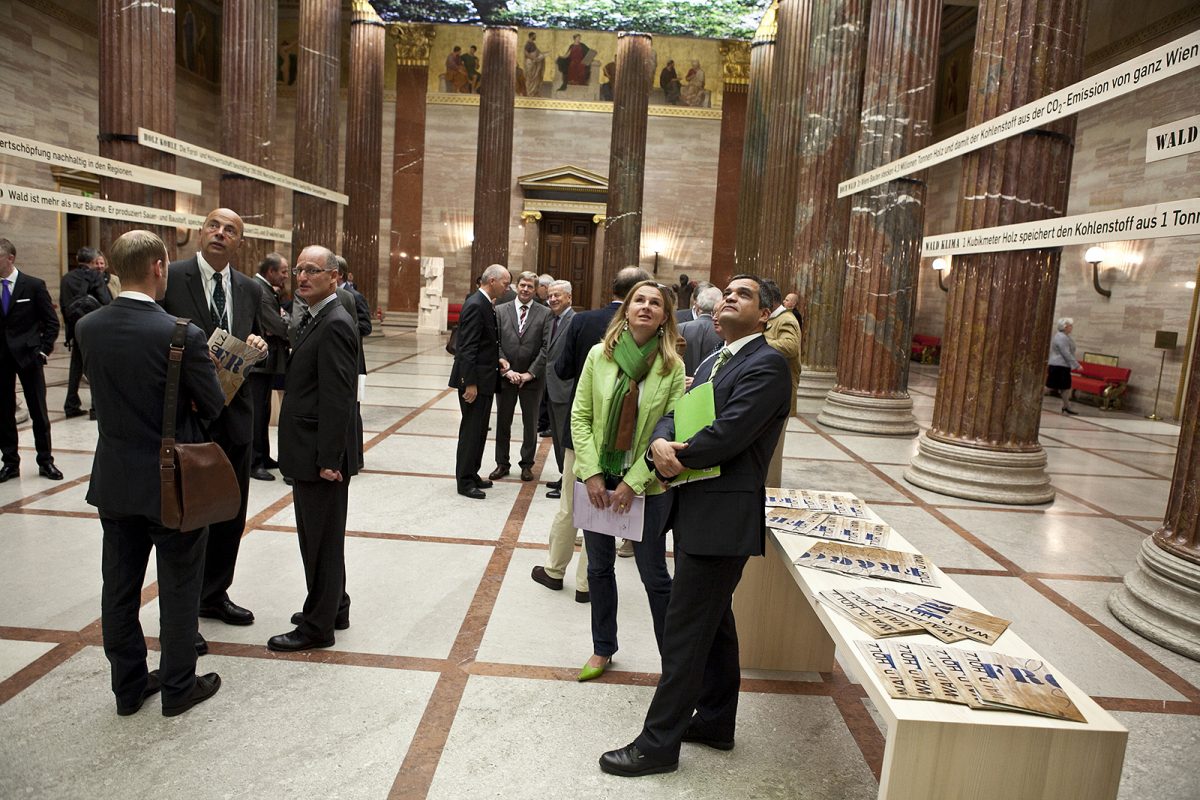 Media cooperation for a wide public
Each week the Austrian daily news­paper “Der Standard” produces a strikingly designed, large-format supplement issued in large numbers. Under the label RONDO Spezial together with the publishers we opened this medium in November 2002 for the first time for a corporate publishing project by proHolz Austria. The aim of proHolz is to communicate the importance of the forest in Austria as a source of raw material and to explain about the added value it creates. Given the general relevance of the theme this kind of journalistic communication to a broad public seemed effective and appropriate. To augment the installation in the parliament this media supplement was produced in an edition of 250 000 copies and was attached to various press media. Well-known journalists provided the contributions. The editor Wolfgang Weisgram wrote in the editorial: “In Austria a perspective is opening up for wood. This branch is already an important economic factor. It provides jobs for 290 000 people. And although it is probably one of the oldest branches of industry, the timber industry is also one of those with the most promising future. For the timber business reflects something that has been lost in modern times: doing business without destroying everything in the process. Today we call this sustainability. And this, in turn, is nothing other than the ancient wisdom that we have only borrowed the world from our descendants.” The title of this medium speaks for itself: “WALD Menschen HOLZ Köpfe”(FOREST people WOOD heads).